I will confess that I was nervous about going to High Voltage ConFusion. There were several reasons for this:

I need not have had any concerns at all. I was right that most of the people there didn’t know us or our work (unless they were a teen librarian or had teen children—there were precious few actual teens in attendance). But it turned out to be a really good thing. No pressure and no expectations. It was really relaxing. One of the most relaxing weekends I’ve had in ages.

Mostly because of Anne Murphy, our liaison. I had no idea that guests of honour get someone to take care of them. It was fabulous. Anne made sure we were fed and happy. She is the best liaison of all time. Thank you, Anne! Why can’t she take care of us all the time? We’re lost without you, Anne!

There was much fun. The Opening Ceremonies were hilarious. A picture of which below. Scalzi interviewing us was very silly and totally enjoyable. Though I was bummed he didn’t bring up unicorns or quokkas.

We got to design our own panels. Thank you so much con organisers for indulging us! And thus were able to vent about stuff that’s been bugging us for ages. Why is there so little sport in fantasy and sf? Why did our audience turn on us during that panel back in Boston in 2004? Do they really just love wheat?

Thus the wheat panel which was FABULOUS therapy for me and Scott, though audience members expecting us to follow the panel description might have been disappointed. Sorry about that! But thank you for not turning on us. You were the best audience ever. Actually, all the panel audiences were smart and engaged and awesome. Me and Scott were dead chuffed that as the weekend went on more and more folks were showing up to hear us gasbag and pontificate. Yay!

The sport panel was also wonderful. Though we had way too much to say and not enough time to say it in. I especially loved that the audience was almost entirely women. Hah! There was also a sports writer, Dave Hogg, in the audience (he really should have been on the panel) who turned out—along with his partner—to be a huge Detroit Shock fan. Go, WNBA! We had an excellently geeky women’s hoops gossip.

I’ll admit that my last few cons had left me with panel fatigue. But now I love them all over again. I wish I’d gotten to see some of the panels I wasn’t on. I heard that all of Kevin Dunn’s (the science guest of honour) were brilliant. He explained soap and and all sorts of other Caveman Chemistry. I can’t wait to read his book.

You’ll be shocked to hear, however, that the best fun was not had during the panels, but at the parties and in the bar, and just generally hanging out. The ConFusion organisers and regulars are the best people on the planet. Seriously I got into so many great conversations and arguments and teasing contests. I can’t wait to go back!2

May I share with you the three best words in the world? 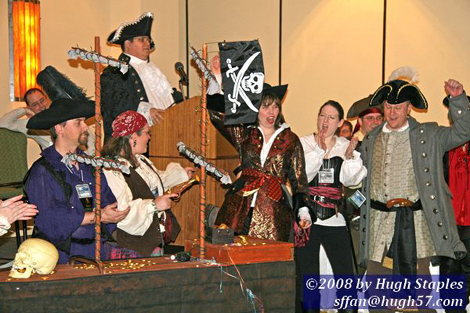 Thanks again, Hugh, for the photo.

I haz met the Roaming Pirate Party. They haz rum3 and pirate hats and jollity by the galleon load. Best pirates ever! I shall treasure my pirate hat and t-shirt for ever!

We got to catch up with old friends like Karen Meisner, John & Krissy Scalzi, and Doselle Young. Why don’t they all live MUCH closer to me? I miss you all already. Waahh!! Not to mention making stacks of new friends. You know who you are! Yanni! Brian! Aaron! And SO MANY OTHERS! You all made it the best weekend ever.

Hell, we even got to see a movie: Cloverfield and it were good. Very good indeed.

If anyone needs a guest of honour me and Scott are so up for it!