What if the most terrifying person you’d ever met was your ten-year old sister?

Seventeen-year-old Australian, Che Taylor, loves his psychopathic younger sister, Rosa, despite all the trouble she makes for him. Now Che and his family have moved to New York City, a new hometown, which provides too many opportunities for Rosa to play her increasingly disturbing games. Che’s always been Rosa’s rock, protecting her from the world. Now, the world might need protection from her.

“Almost unremittingly tense, Larbalestier’s chilling study of morality, psychopathy, and the nature of evil is narrated by Australian teenager Che Taylor, whose move to New York City with his family only heightens his fears about what his 10-year-old sister, Rosa—who seems entirely devoid of empathy—is capable of.”

“Larbalestier reminds readers of her masterful gift for slippery, unreliable characters … thriller fans will devour this suspenseful, chilling meditation on the roles of nature and nurture in creating dangerous criminals.”

“The plot is devilishly clever, with clues that point to, without giving away, the surprise twists . . . even those with no prior experience of [Larbalestier’s] craftiness will find Che’s helplessness in the face of Rosa’s casual cruelty absolutely chilling.”

—The Bulletin for the Center for Children’s Books, (starred review)

“A tense, thrilling rumination on the psychology of evil . . . Rosa is a truly chilling figure.”

“This dark thriller is the 1956 film The Bad Seed meets 2016; readers will be simultaneously terrified when Rosa’s present and afraid to let her out of their sight.”

“Haunting is the best way to describe Larbalestier’s latest home run . . . I loved the hidden depth of the secondary characters and found the complexity of the family dynamics familiar and fascinating.”

My Sister Rosa is out now from Allen & Unwin in Australia and New Zealand and from Soho Teen in North America. The audio book version is by Blackstone Audio.

On a winter’s day in 1932 a gangster’s moll, and a street urchin who can see ghosts, tip the balance in a bloody underworld power struggle. Razorhurst is published by Allen and Unwin in Australia and NZ and by Soho Press in the USA and Canada. There is also an audiobook produced by Blackstone Audio.

“[A] dark, unforgettable and blood-soaked tale of outlaws and masterminds.”

What I’m Working On

Right now I’m hard at work on a brand new novel that’s continuing my exploration of psychopaths. Apparently My Sister Rosa wasn’t enough for me.

Liar is a psychological thriller set in New York City told from the point of view of a compulsive liar. Liar is published in Australia by Allen & Unwin and in the USA by Bloomsbury. There are also non-English language editions.

“Readers will get chills paging through Larbalestier’s suspenseful novel . . . with a masterfully constructed unreliable narrator [they] will be guessing and theorizing long after they’ve finished this gripping story.”

It’s a question as old as time itself: which is better, the zombie or the unicorn? In this anthology, edited by Holly Black and Justine Larbalestier (unicorn and zombie, respectively), strong arguments are made for both sides in the form of short stories. Half of the stories portray the strengths–for good and evil–of unicorns and half show the good (and really, really bad-ass) side of zombies. Contributors include many bestselling teen authors, including Cassandra Clare, Libba Bray, Maureen Johnson, Meg Cabot, Scott Westerfeld, and Margo Lanagan. This anthology will have everyone asking: Team Zombie or Team Unicorn?

“Without a clunker in the bunch, this anthology more than lives up to the potential its concept suggests. Zombies or unicorns? There’s no clear winner, unless it’s readers.”

How to Ditch Your Fairy

Welcome to New Avalon, where everyone has a personal fairy. Charlie’s is a parking fairy. Problem is she’s fourteen, can’t drive, and doesn’t want to. She hates her fairy. How to Ditch Your Fairy is the tale of her quest to ditch it and get a better one such as her best friend’s clothes-shopping fairy or her worst enemy’s all-boys-will-like-you fairy.

Justine Larbalestier has a super-cool writing fairy, and I am vastly jealous! Thoroughly entertaining, totally enchanting, wickedly funny, and 110% doos, How To Ditch Your Fairy had me grinning from page one (when I wasn’t laughing out loud). And as soon as I can figure out how to do it I’m going to ask to swap fairies with Justine. —Libba Bray, New York Times bestselling author of A Great and Terrible Beauty

The whole thing was an accident. Sarah Rees Brennan and I were idly wondering what it would be like if your best friend was dating a vampire and somehow found ourselves writing a whole novel from the point of view of Mel Duan, whose best friend, Cathy, falls in love with a vampire. Team Human is published by Allen & Unwin in Australia and New Zealand and by Harper Collins in the USA and Canada.

“This smart and entertaining novel—part Nancy Drew with vampires, part thoughtful and provocative story about assumptions—fully blooms in the second half. Themes of honest friendship and freedom of choice mix with zombies, accidental romance, a diverse and complex cast, and sharply funny dialogue to create a thoroughly enjoyable read with a core of unexpected depth.”—Publishers Weekly (starred review) Best Summer Books 2012 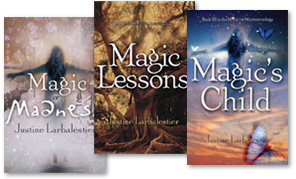 Reason’s lived all her life in the outback with her mother, Sarafina, on the run from her evil grandmother, Esmeralda. Esmeralda believes in magic and practices horrifying dark rituals. But when Sarafina suffers a mental breakdown, Reason is sent to the one place she fears most—Esmeralda’s house in Sydney. Nothing about the house or Esmeralda is what Reason expected. For the first time she finds herself questioning her mother’s teachings. Then when she walks through Esmeralda’s back door in Sydney and finds herself on a New York City street, Reason is forced to face the truth. Magic is real. And Reason is magic.

A collection of 11 key stories and set them alongside 11 new essays, written by top scholars and critics, that explore the stories’ contexts, meanings, and theoretical implications. The resulting dialogue is one of significance to critical scholarship in science fiction, and to understanding the role of feminism in its development. Organized chronologically, this anthology creates a new canon of feminist science fiction and examines the theory that addresses it.

The Battle of the Sexes in Science Fiction

Battle of the Sexes was shortlisted for the Peter McNamara Convenors’ Award, the William J. Atheling Award and the Hugo for Best Related Book My first book, The Battle of the Sexes in Science Fiction was originally my PhD thesis. It’s a look at science fiction’s engagement with sex, gender and sexuality from 1926 until the early 1970s. As we all as an examination of the early days of the James Tiptree, Jr. Award.

I write novels, am obsessed with too many sports, and tweet way too much. My latest novel is My Sister Rosa

For more info about me there’s a whole bunch of interviews here plus my FAQ.