When I first saw the cover of the June 1940 Astonishing Stories by Gabriel Mayorga, I knew I’d found the cover I wanted for Battle of the Sexes. Even looking at the faded, tattered copy in the Rare Books section of Fisher library (University of Sydney) I could see that it was perfect: a woman and a man locked in combat, the man with a helmet, the woman seemingly able to manufacture her own oxygen. It had scary eye beams, strange phallic objects, stars that were actually eyeballs. In short everything that’s in the book was there on that cover. I had to have it. 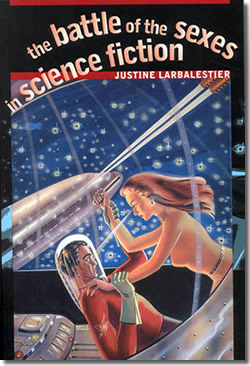 Wesleyan agreed that the Mayorga cover was fabulous and perfect for the book. All I had to do was secure the rights. But I had no idea how to go about doing so and a few futile google searches provided no answers. So, as I often do when faced with a problem that can’t be solved in seconds, I procrastinated.

At the time I was in New York City interviewing people for a book about the Futurians (an sf fan group started in the late 1930s that included such luminaries as Isaac Asimov, Cyril Kornbluth, Judith Merril and Fred Pohl). One of them was Betsy Wollheim, head of DAW Books and daughter of Donald A. Wollheim, the founder of DAW Books and one of the most influential science fiction editors and publishers ever. I met with Betsy to ask her about her father (he’d also been a Futurian). We met in her gorgeous apartment. The first thing I saw as I walked in the door was the original art for that Astonishing cover hanging on her wall in all its oil painterly glory.

“Oh my God!” I blurted out. “That’s the painting I want for the cover of my book!”

Betsy said she’d see what she could do, which she did. Within days the copyright owner, Argosy Communications Inc., had agreed to let Wesleyan use it and Betsy had agreed to let a photographer come take a photo. And hey presto! my book is gorgeous! Thank you, Betsy Wollheim and Argosy Communications. And thank you to the noble, yet frequently maligned, art of procrastination.