I’m sitting here staring at the map for my new novel, Razorhurst, which comes out in Australia and New Zealand in July. The map is a thing of beauty. I’m a little teary looking at it. I’ve never had a map in one of my books before. Let alone such a gorgeous one: 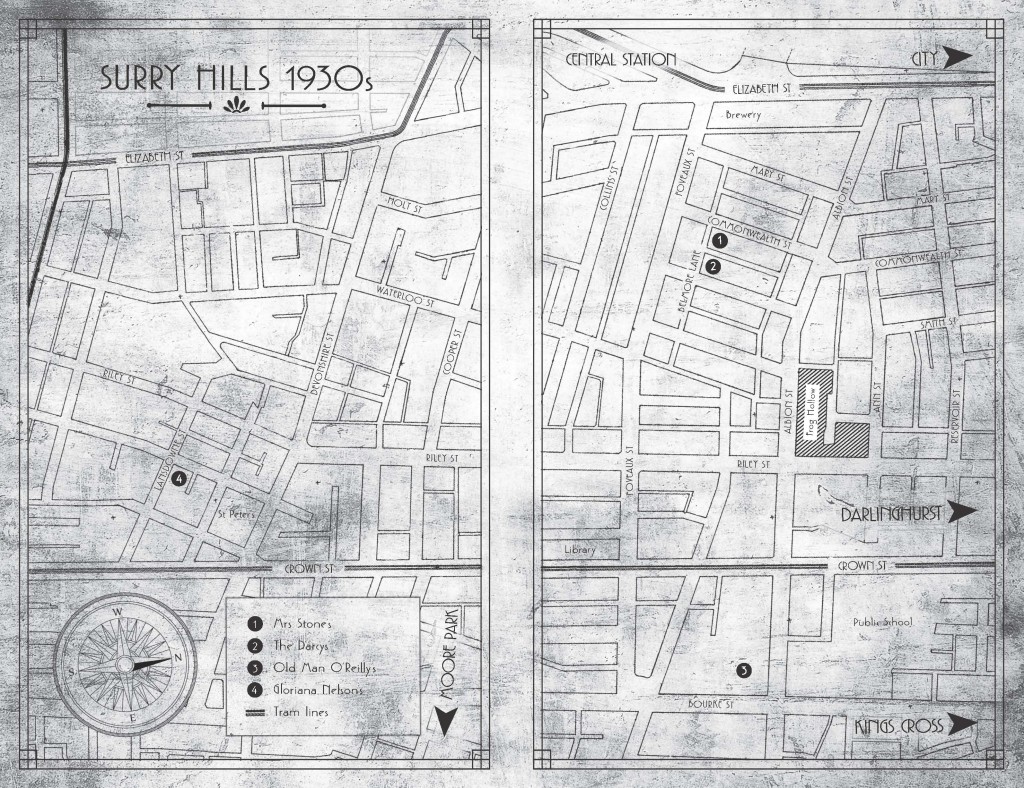 As you can see the map does not cover a large swathe of territory. Razorhurst is a Sydney novel but that map is not all of Sydney, it’s not even all of Surry Hills, the suburb (neighbourhood) where Razorhurst is mostly set.

It’s a tiny, tiny part of Sydney, which got me thinking. I say I know Sydney better than any other city in the world and that’s true. But I hardly know Sydney at all. The Sydney I know is a handful of suburbs (neighbourhoods). I rarely go any further west than Marrickville, further north than the city, further east than Paddington, further south than Alexandria. I’m the total opposite of this bloke valiantly striving to walk every street in the city. My New York City is similarly constrained.

Worse, even in those parts of the city I claim to know well, there are so many lives going on that I know nothing about. This is brought home to me most vividly at my gym. My gym is known for being a crim gym, also as a weightlifter’s and body builder’s gym, and as a gay gym. I don’t fit into any of those categories. I’m not an enforcer for any shady business men, while I’ve lifted weights I’ve never done it in competition, I’m so very much not a bodybuilder,1 and I’m not a gay man.2

I’m fascinated by those first two groups because they live in worlds I never intersect with except at the gym. Their Sydney is not my Sydney.3 I’ve never been anyone’s enforcer. Never been involved in any kind of robbery. Never sold drugs. Never done whatever else it is that those guys do that I don’t know anything about because I am so not part of that world.

I do know a bit more about bodybuilding because the bodybuilders sometimes talk about it.4 What I’ve overhead is mostly about what they can’t eat in the lead up to competitions and them fretting about their body fat percentage. I’ve also overheard loads of stuff I can’t make sense of because I don’t know enough of the specialised language of their world.

Hmmm, I digress.5 My point is that there is so much going on mere metres from where we live that we know nothing about. People who live their lives in the shadowy illegal economy. People who work the night shift, going to sleep just as I’m getting up to write. Engineers! Actuaries! Vampires!6

There are as many different Sydneys as there are Sydneysiders. Hell, there’s more than that because visitors experience a whole other Sydney. I have been known to say that I am unfond of London and also of LA. My London is always rainy and the people are really rude. My LA consists of me being stuck in a car feeling like I’m going to throw up. I’ve only been to both cities a handful of time and know them hardly at all. My London and LA are awful. But I have many friends who adore both places. Who can’t understand why I don’t like London/LA. When I describe my LA/London they just stare at me. It doesn’t resemble their city at all.

The map above is of my imagined Surry Hills of the 1930s. It’s a map of my Razorhurst, a place that never existed except within the fevered imagination of the tabloid Truth.7 We all know novels are imaginary. But I often think that the places we live are also imaginary. My Sydney isn’t like anyone else’s. Neither is my New York City. They exist almost entirely in my mind. In how I interpret (and interact with) the place I live in. Maybe cities are secretly novels. Or vice versa.

Either way I love cities and novels and wish I could know and understand them so much better than I do.

TL;DR: Look at the map for Razorhurst! How gorgeous is it? Very. Cities are vast and complicated and unknowable.