So ages back @MalindaLo requested that I “blog about twitter etiquette: the good, the bad, the ugly.”

Best. Request. Ever. Especially as there are so many other people who are so much more qualified than I to impart such advice. Like, for example, the YA queen of Twitter, Maureen Johnson, who has about as many followers on Twitter as, like, a genuinely famous person, not a mere writer. Amazing, huh?

But I don’t care that I’m not qualified to dispense advice. I will do it anyway!

In my heart of hearts I have always longed to be an agony aunt. Yes, I wish I was Captain Awkward dispensing good advice and making the world a better place. But, you know, Captain Awkward is so amazing at it and her advice is such genius that I think I will leave the throne to her.

Besides which she never gives bad advice and I have a sick need to dole out hideous advice as well as good.1

NB: All my advice is for people with public not-anonymous twitter accounts who want to engage with people they don’t know. You private types chatting to your mates: as you were.

Never tweet anything if you would freak out if your parent or grandmother or employer or publisher or agent or editor or spouse or partner or child or whoever-it-is-that-you-wish-to-continue-respecting-you read it.

And, really, that should be your rule for everything you put online even if it’s a comment on your friend’s locked blog. I have friends who won’t say anything in email or private IM chats that they would not stand by in public. That is very wise but much harder to stick to. Our online indiscretions will bite all of us in the arse eventually. It’s just a matter of when, and how far the teeth sink in, and whether the bite becomes infected.2

At the other end of the spectrum:

Twitter is not the place to be arranging a dinner date, or where to meet for a concert, or lunch, or whatever.3

Text each other already. No one who follows you both needs to know the minutiae of your social calendar. Either you’ll be boring those who aren’t involved—nothing is less interesting than being a witness to other people organising a get together—or you’ll be making them very cranky because they’re not invited too, you mean excluding poo head!

Or, worse still, you just told the stalker you didn’t know you had where you’re going to be. Paranoid, I know, but it could be TRUE and what if they have BAD INTENTIONS? Not all stalkers are the bumbling-but-sweet kind from romantic comedies.4

Obvious, I know. I had an account for ages before my first actual tweet. I lurked. And then when I started tweeting I still stuffed it up. I had no idea that if I tweeted directly at someone only they and the people who followed them AND me could see it.

This was a problem because I invited my followers to ask me writing questions and then responded to those questions directly. The result: hardly anyone was seeing my responses.

To make what I am saying clearer, in the following conversation the first tweet by Garth can be seen by all his followers. However, the two tweets after it can only be seen by people who follow both Garth AND me: 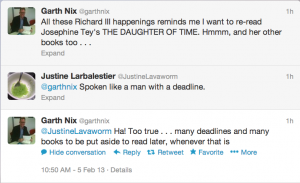 I was just teasing Garth so I saw no need to make it visible to more of my followers by putting a character like “.” in front of Garth’s twitter handle.

You don’t have to follow everyone who follows you

Though Meg Cabot seems to do that. Because she is all that is good and wise and generous and kind.

For starters quite a few of your precious followers are going to turn out to be bots. I know, I know. But these bots are not at all like the ones from Blade Runner.5

Also the mute button is awesome. I frequently mute people when they are live tweeting shows I haven’t seen yet or are on a rant. Often I catch up on the rant later. But sometimes I just want Twitter niceness and silliness to float by and don’t want to know about all the bad things in the world.

I very frequently go on rants on Twitter. By all means mute me! You can also mute annoying and/or spoilery and/or upsetting #hashtags.

I have heaps of in real life friends who do not follow me on Twitter and vice versa. The reasons for this are varied. Some of my friends are not on Twitter. Shocking I know but there it is. Some tweet for work reasons and only follow people in their area. Or they really really hate anything to do with sport or Eurovision and know that to follow me is to be hit with tweets on those sacred subjects.

It’s okay that we don’t follow each other. We’re friends. We’ll stay friends. Despite my propensity to tweet about cricket. And theirs to live tweet Glee.

I do not check my twitter feed every day. I tend to check it when I’m bored. I tweet a lot while waiting for stuff. Or while I’m procrastinating. I tweet not at all when I’m really busy. If I didn’t respond to your tweeting at me? I probably didn’t see it. I assume others are the same way.

Other than that Twitter is whatever you want to make it. Personally I love to have long conversations with fellow women’s basketball and cricket and Olympics and sports obsessives.

It really is a wonderful way to find the people who love the same things that you love and then to bond over it. Is Seimone Augustus awesome? Why, yes, yes she is.

I also love to rant about ALL THE THINGS THAT ARE WRONG IN THE WORLD. OMG WHY IS THE WORLD SUCH TOTAL CRAP? I.e. ranting about issues around social justice and politics and shitty TV shows. It can be very cathartic to share your outrage and horror. Though it can also be super depressing. So be careful if you’re prone to that.

It’s also fun to crap on about all that is good and wonderful in the world, like, my fingerlime is flowering and tiny little fingerlimes are appearing on it and ISN’T THAT THE MOST AMAZING THING IN THE ENTIRE UNIVERSE?

Well, except that I wrote the above paragraph months ago and none of the tiny fingerlime fruits survived and ISN’T THAT THE WORST THING IN THE WORLD?6

This is probably the only rule of Twitter that everyone follows. WHICH IS LOVELY BECAUSE FINALLY THERE’S A PLACE WHERE YOU CAN’T OVERUSE CAPS. PHEW, EH?!

BENEDICT CUMBERBATCH IS OVERRATED. BUT, WOW, DOES HE HAVE THE BEST NAME EVER.

They allow you to take part in very important discussions such as:

#AusPol is the hashtag used in Australia for discussions of Australian politics. It frequently drives me to drink. Exercise caution when approaching it.

Then there’s lots of sporting ones for those of us who like to follow ball kicking, hitting, throwing, bouncing etc.

Then there’s ones for your favourite shows #TVD #Scandal #MKR #Nashville etc. These are best avoided if you are not watching in real time because, wow, does Twitter love to spoil the beginning, middle, ending, and all cool bits of every show ever.

Fortunately you can also make up your own hashtags. #thereis2anIinTeiam Actually, that’s probably not a good one.

I recently had a fun conversation about how books are evil with @LisaYee. Sadly we neglected to hashtag it as #booksareevil Thus our incredibly silly convo is now hard to track down. #weareslack

Hmmm, so this post turned out to not so much be about Twitter etiquette so much as it is about how much I love Twitter. Quite a lot really. #isfun AND EVERYTHING WRIT ON IT IS TRUE.