Is like this: I have always wanted cowboy boots ever since I saw my first pair on the feet of indigenous stockmen in the Northern Territory of Australia. Those boots were beaten up and weathered like you wouldn’t believe and I’d never seen such cool boots in my entire life. Want!

They were plain though. My fancy western boot lust didn’t develop until I saw my first rodeo. It wasn’t any of the performers who were wearing them but two women in the audience had on full cowgirl regalia and shiny, shiny boots. I am magpie. Shiny fills my heart with lust.

Over the years, I have tried on many pairs of fancy western boots and they have never been quite right. Not shiny enough. Not shiny in the ways I want them to be. Too high-heeled. Too pointy. Too pink. Too hurty on the feet. Or perfect and way out of my price range.

A few years back I heard that you could get cowboy boots handmade special to fit your feet and that you could have whatever design you wanted. I cannot tell you the joy in my heart when I learned of this possibility. Oh, bliss! Oh, joy! The family coat of arms on my very own boots! Want! 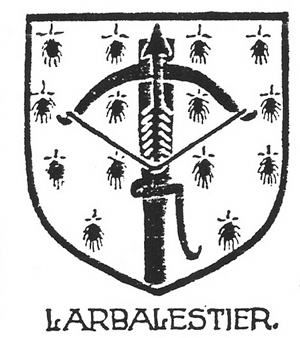 Then last year Penguin sent me and Scott to San Antonio for the TLA conference.1 San Antonio just happens to be the home of Little’s Boots, one of the best makers of western boots in all of the US of A. Clearly, it was time for me to have the boots my little heart pined for.

So, I set up an appointment and early last April I went in for my fitting, clutching a printout of the Larbalestier coat of arms. In Old French my surname means the crossbower, ie the one who uses a crossbow. “L” is the, “arbalest” is crossbow, and “ier” is er. Hence the great big crossbow on the coat of arms. I have no idea what the thistles are for. Because we are a prickly lot?

At the appointment I was asked a zillion questions. What kind of design did I want? I waved the printout of the crossbow. You want just that? In what colours? You don’t want any other design elements? Oh, I said. Look around the shop, they told me. I did. My eyes bugged out. 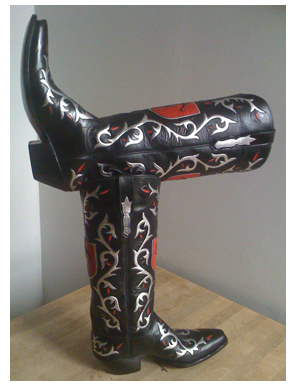 I made many design decisions. Scott kept vetoing my more shiny desires.2 After about an hour the design was settled.

Then they started asking me about what kind of heel and toe I wanted. What ears? How high up my calf did I want the boots to go? What did I want the top of the boots to look like? Straight or with a little v? What kind of leather did I want? Some were out of the question—you don’t use crocodile or alligator or eel for fancy boots. So my choice was between calf and kangaroo. I tried on many different boots to make my decision. Walked around the shop feeling like a rodeo queen.3

After almost two hours of exhausting decision making, Dave Little started measuring my foot. I had not realised how many dimensions feet and calves have. This also took some time and involved Dave mocking my socks more than somewhat. (They’re cut to fit left and right feet and thus are way more comfortable than normal socks. They are also labelled with a little R and L, leaving Dave to suppose that we Australians are left and right impaired.) 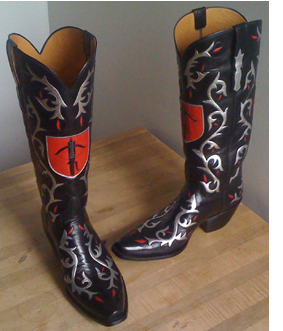 Finally, we gave them a deposit of half the total. A very big total. These boots are not only the most expensive boots I have ever owned, they are the most expensive item of clothing I have ever owned. Six months later, Dave promised, my boots would arrive. And then, because he’s such a lovely bloke, he gave us a lift back to the hotel because we were running late for our next TLA appointment. Texas hospitality is no lie.

Dave was four months off on the arrival time. But the boots are even better than I imagined. They are the most comfortable footwear I’ve ever known. All other footwear are devices of torture in comparison. I may never take these boots off again. In fact, if it weren’t for Scott’s objections,4 I’d’ve slept in them last night.

I love my boots.

Now all I need is a Vivienne Westwood ballgown and my life will be complete . . .