Today is the official publication day of How To Ditch Your Fairy in North America. To celebrate I am doing what I did for Magic’s Child: sharing the first sentence of each chapter of HTDYF.

As usual my concern is to protect you, the potential reader of the novel, from unnecessary spoilerage. Because there is nothing worse. NOTHING. Hence there is a small amount of redaction. Trust me, it is for your own good.

Without further ado, behold the How To Ditch Your Fairy first sentences:

2. I had chocolate and strawberry in a crunchy nut and brioche cone and [Redacted]2 had lemon and lime in the vanilla cone.3

4. It was such a long walk home that I almost wished I’d accepted the lift with [Redacted].

7. [Redacted] cornered me as I made my way to [redacted].

8. Dad was waiting outside the main gates, sitting on a fire hydrant, sketching.6

9. On Tuesday at first recess, [Redacted] and [Redacted] dragged me out onto the lawn over looking the outdoor [redacted].

10. While I love this school more than anything, there are aspects of it that are less than doos.

11. [Redacted] cemetery is the biggest and oldest in the city.7

12. By the time I got [redacted] the door to [Redacted’s] room was closed and no light seeped out.

13. [Redacted] was outside, sitting on my front steps, bouncing coins off the back of his hand as if they were jacks.8

15. By Saturday I had racked up eleven (eleven!) additional [redacteds] , bringing my grand total to seventeen, or it would have except that my ten hours of [redacted] got me down to seven and kept me from getting any more game [redacteds].9

16. Walking through the city even at 8:30AM on a Sunday there were cars everywhere.10

23. [Redacted] came into the library during first recess.11

37. The [redacted] felt weird and uncomfortable and itchy.

An ARC1 of How To Ditch Your Fairy just arrived! I am filled with squee. HTDYF is almost a real book! 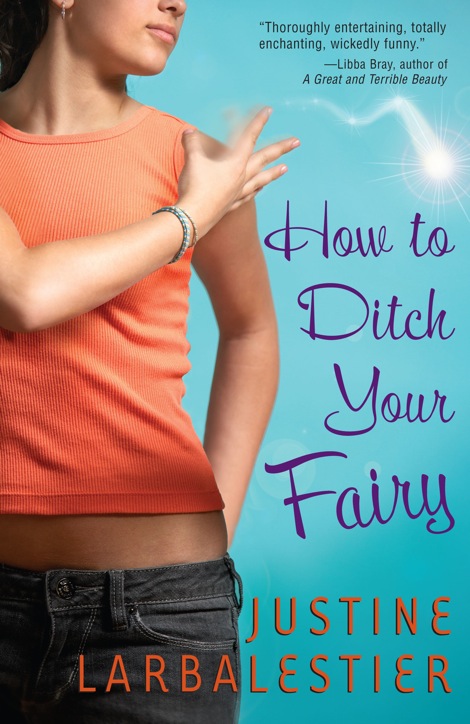 You know what the most fabulous part of it is? (Other than the quote from Libba Bray2 ) My name is as big as the title. My name is bigger than it’s ever been! Oh, happy day! 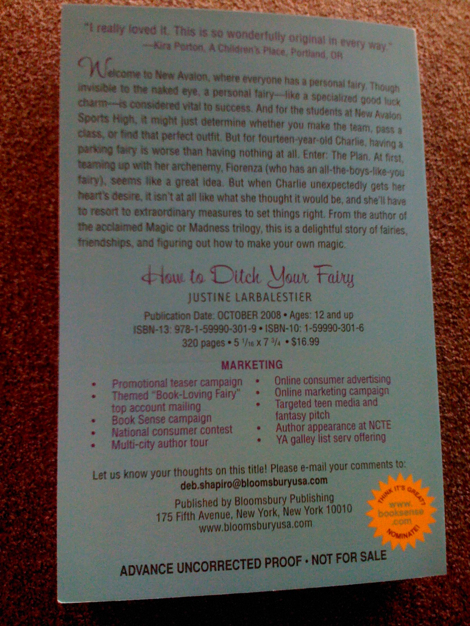 I’ve never had one of those on the back of an ARC before. And it includes the words “multi-city author tour”. So maybe I’ll be getting to your city and have a chance to meet you later this year!

Have any of you ever taken a lie detection test of any kind? (Polygraph or written q & a or some other kind of test I have not read about yet.) If so would you care to tell me about it? Feel free to be anonymous in the comments if you’d prefer.

And more generally: for those of you who have told lies and gotten away with it—what’s your method?

Do any of you believe you have the ability to tell when someone else is lying? Is it a general ability or just with people you know well?

Can any of you recommend any good non-fiction articles and books about lying? Most of what I’ve found so far has been deeply underwhelming.

And thanks for all the fabbie fairy responses. It was mucho gratifying to see that quite a few of your fairies are already in How To Ditch Your Fairy.

Recently several friends have been on the receiving end of some very bad blurb etiquette and they have requested that I set the world straight about how blurbage should actually work. I live to serve.

What is a blurb? It’s the little quotes that typically appear on the back of a book saying how wonderful it is. For instance here is what Libba Bray has to say about How To Ditch Your Fairy:1

Justine Larbalestier has a super-cool writing fairy, and I am vastly jealous! Thoroughly entertaining, totally enchanting, wickedly funny, and 110% doos, How To Ditch Your Fairy had me grinning from page one (when I wasn’t laughing out loud). And as soon as I can figure out how to do it I’m going to ask to swap fairies with Justine.

A while back I talked at length about my policy on blurbs. The short version is: Yes, I am happy to look at books and if I love them I will blurb them.2 Turns out that there are other aspects of blurbage that I did not cover. Mostly because I did not know these things happen. But apparently they do.

This last point leads to a bigger point: Anyone who advises you that lying: claiming blurbs you don’t have, doctoring your publications list, claiming non-existent connections etc. etc. is a good way to get “your foot in the door” is full of it.

Don’t do this. Not ever.

Finding out that someone you have NEVER met is using your name to get ahead is vastly cranky-making. Also in the age of the internet it’s almost impossible to get away with these shenanigans. Google knows when you lie.

I think that about covers it, but if I’ve missed anything do please let me know.

Apparently, the top sekrit title of my new book is already out of the bag. And who was the wicked naughty person who let out the top sekrit ahead of the cover art showing up? What’s the name of that evil party pooper?

Er, um, that would be me. In this interview (no. 13) with Jim Hall of Cult Pop, an excellent Detroit TV show about pop culture.

So I will share with all of you as well. The title of my next book, formerly know as The Ultimate Fairy Book and before that as the Great Australian Feminist Monkey-Knife-Fighting Elvis Cricket Mangosteen novel, is:

How To Ditch Your Fairy

I think it is the best title ever and not only because google’s never heard of it. Not even because the genius Libba Bray came up with it. But because it perfectly describes my book and makes me smile.