No, not my homeland, the movie. I went and saw Australia because my sister, Niki Bern, worked on it. I doubt I’d’ve gone otherwise. I’m not a fan of Nicole Kidman’s acting unless she’s playing a psycho or a bitch. Her turn in Moulin Rouge is one of the worst pieces of miscasting I’ve ever seen. The ads for Australia are full of Kidman’s eyes afluttering and Jackman looking all manly. They did not fill my heart with hope.

Also the title put me off. Was Lurman claiming he could sum up my country’s history in one film? That he could encompass everything important in one movie? Right. Good luck with that, Baz.

Or, worse, was he pandering to dumb and kitschy expectations of non-Australians? I can’t tell you how many folks I’ve met on my travels who are astonished to discover there are cities in Australia. Or are convinced that the entire country is one great big desert and that all Australians are just like the crocodile hunter. To which, sigh. 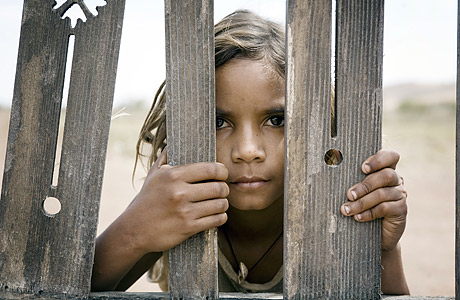 It was not as bad as I expected. There are worse ways to spend three hours (or however extremely long it was). I wasn’t bored that often, which was more than I expected. For which I thank Brandon Walters playing Nullah. This eleven-year old actor single-handedly saved the movie. When he’s on screen that’s where you’re looking; when he’s not you pine for his return.

Lurman should have ditched the tedious Kidman/Jackman story and told Nullah’s instead. I wanted to know more about him, more about his mum and about King George. Walters was by far the most convincing and interesting actor in the movie. The only one who didn’t seem to be embarrassed by his lines. The only one who made the cliches seem fresh. If the movie had been about Nullah, it could have been amazing. Instead it was a frequently cringe inducing, occasionally beautiful, sometimes funny, but mostly an embarrassing big fat mess.

Other than Nullah the highlight for me was seeing my sister’s name in the credits. Her biggest one thus far: Compositing Supervisor. Go, Niki!

If you’re going to see Australia wait till it’s on DVD—that way you can skip all the bits that Brandon Walters isn’t in.