In the vociferous arguing about the ins and outs of who behaved worst over the second test etc etc there are people implying that criticising the Australian cricket team is unAustralian and whingey.1

Please! I love my country, I love cricket, but when the men’s team behave like dickheads they should be called on it.

People who play sport at a professional level are not exempt from the social contract. No one is. Writers (to pick a random example out of the air) shouldn’t behave like dickheads either. Recently I was at an award ceremony where the speeches of the winners were generous and moving. All but one. This one person got up to accept their award without a gram of graciousness. Their speech was about the importance of their book and the judges’ perspicacity in picking it as the winner. That speech left me not wanting to read anything by that writer. I don’t even want to meet that writer.

Very few people in this world achieve things without considerable help; acting like you did it all on your own is graceless and rude.

Ponting’s and the rest of the team’s arrogance and inability to admit that they ever do anything wrong makes me ambivalent when Australia wins test matches. Don’t get me wrong. I love for Australia to win, but, well, I love it a lot more when they’re gracious in victory.2

So, yeah, this debate isn’t just about cricket. It’s about how people should behave. How we should treat the people around us. There’s a reason that photo of Flintoff offering commiserations to Brett Lee has become so famous. It captures a moment of perfect grace: 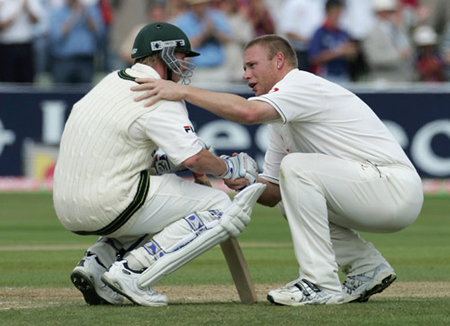