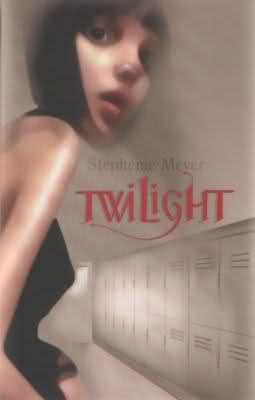 In 2006 when Twilight was published in the UK it looked like this. What were they thinking? This cover conveys nothing about Twilight. You’d never think it was an angsty romance between cranky teen girl, Bella, and perennial teenage virgin vampire, Edward.

This would be a great cover if it was about a terrifying three-metre tall alien takeover of a high school. Or as Jennifer Laughran suggested a tale of about an elven princess who joins the military. I would totally read either one of those books. But it does not match Twilight. Especially when you compare this cover to the US stark black with red apple in hands one, which perfectly captures the book.

You will be unsurprised to learn that Twilight tanked when it first came out in the UK. It only took off after rejacketing with the original US cover.1

Jackets matter. OMG do they matter. They have to convey what the book is about, they have to make you want to pick up the book. If you read the book and it doesn’t resemble the cover—in a way that makes you feel lied to—you are likely to be cross.

A few years ago the wonderful Bennett Madison had a book out called September Girls, which is a gorgeous and weird poetic meditation on masculinity, femininity and misogyny. Yet look at the cover.

To me it screams summer romance. Possibly one that will tug at your heart strings, be a bit melancholy and wry. But definitely a romance. September Girls is not a romance. This is entirely the wrong cover.

A book that is published as a romance—as opposed to a book that is romantic or a love story—has to have a happy ever after ending and the romance has to be the A plot. The very centre of the novel. September Girls is not remotely a romance. It’s almost the opposite of a romance.

Some of the book’s first readers reacted badly to it.2 I’m convinced that part of that was because of the misleading jacket. (Though it didn’t put off the leading review journals who gave September Girls many much-deserved starred reviews.)

I am sympathetic to this reaction. I have read books that were billed as romances that did not have happy endings and I was most displeased. I read romances at least partly because of the surety of that happy ending. I often read them when I really need a happy ending. It feels like a punch in the stomach if I don’t get one. The cover lied to me! Unacceptable!

But there are other books where the cover doesn’t match the story and I’m not angry because it feels more surprising than a lie. For example, I find both Jenny Han and Sarah Dessen’s books to be more complicated and interesting than their breezy, summery covers led me to believe. But it felt like a bonus not a minus.

Why does this happen? Many people have input into the final jacket of a book. Not just the editor, but also sales and marketing, as well as the major accounts they’re trying to sell to. Some of those people won’t have read the book. That means they’re only looking at what they think will sell. It’s harder for them to judge whether the cover is a good match for the book.

The other factor is that many readers don’t seem to care. Publishers have seen books with misleading covers do really well. And as with Han and Dessen sometimes misleading is not a bad thing.

It’s incredibly hard to get the right cover. I celebrate every time my books get a cover that doesn’t make me cry. Which, I hasten to add, has been for most of my career. I’ve been very lucky. What covers do you think most successfully convey the book within?