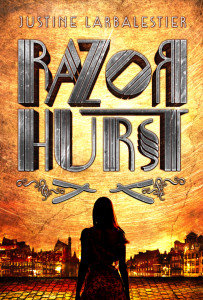 Today is the official publication of Razorhurst in the USA and Canada by Soho Press. For those of you who have been waiting since last July when it was published in Australia and New Zealand the wait is over!

For those of who you have no idea what I’m talking about: Razorhurst takes place on a winter’s day in 1932 when Dymphna Campbell, a gangster’s moll, and Kelpie, a street urchin who can see ghosts, tip the balance in a bloody underworld power struggle. As you do . . . You can read the first chapter here.

Razorhurst is my first solo novel since Liar in 2009. Loads of extremely fun research went into the writing of it. I walked every street in the inner-city Sydney suburbs of Surry Hills, Darlinghurst, and Kings Cross, trying to imagine what they looked like, smelled like, tasted like, back in 1932 when, according to Sydney tabloid Truth, the streets were crowded with “bottle men, dope pedlars, razor slashers, sneak thieves, confidence men, women of ill repute, pickpockets, burglars, spielers, gunmen and every brand of racecourse parasite.” 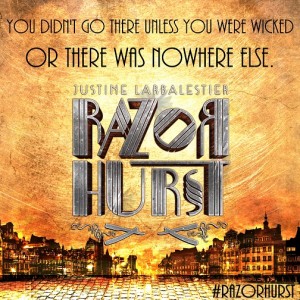 I talk more about my influences here and here on Scalzi’s Whatever. Alert readers may notice that I contradict myself in those two pieces. What can I say? The influences on this book were many! But in short: blood, razors and ghosts.

So far the response in the USA has been pretty stellar1 with starred reviews from Publishers Weekly, School Library Journal and Kirkus (“a dark, unforgettable and blood-soaked tale of outlaws and masterminds”). The Horn Book Magazine said this: “Yoking paranormal thriller, roman noir, and historical fiction, Razorhurst teems with precisely realized period details and an expansive cast of unsavory characters, as well as numerous allusions to the films noirs and Sydney history that inspired Larbalestier . . . intensely lucid and sharp.” Yes, I am blushing. 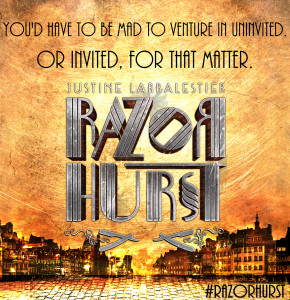 Razorhurst was just named as one of Publishers Weekly Books of the Week along side the likes of Kazuo Ishiguro. Double blush! It’s also one of the twenty books picked for Amazon’s Big Spring Books: Teen & Young Adult. Really thrilled to be on that list alongside books like Courtney Summers’ brilliant All the Rage. I may spend the rest of my life blushing.

Go forth and borrow or purchase from your favourite library or bookshop. Here’s hoping you enjoy!2

Note: For those wondering why I’ve not been responding to tweets, emails, comments here etc. I’m still not 100% recovered and have to save my keyboard time for rewriting my next novel, which publishes in the US a year from now and in Australia in November. I still love you all and hope to be less silent soon.