In a recent interview Becky Hammon, who plays for the San Antonio Silver Stars had some very smart things to say about feminism. She’s an amazing and very smart ball player, but her response to the following question made me love her even more.

Silver Stars Nation: What would you say to younger girls that play basketball but yet do not support women’s and girls basketball as a whole?

Becky: I think that is one of the saddest things I come across. For a couple reasons. 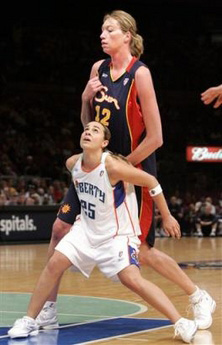 First of all, lets not forget our history ladies. It wasn’t so long ago that women weren’t allowed to compete in sports. So many unfulfilled dreams, so many opportunities that were denied simply because you were a woman. We all stand on the foundations that some one else who went ahead of us built. And more than likely the foundation was built out of blood, sweat, broken dreams, and tears. And if we’re not careful, and if we don’t support each other, all that hard work could crumble. The opportunity is not promised to be there tomorrow. Its still fragile, because its still a very young ideology.

Secondly, young girls, young women, middle aged women we are failing to see the bigger picture here! Its not just about the WNBA or sports, its about equality and respect-which every human being deserves, whether male or female. Breaking barriers and stereotypes so that when YOUR daughter, YOUR niece, YOUR mother walks into that job interview SHE will have an EQUAL shot getting hired and paid the same as if a male walks in for that same job position.

So ladies, we’re not there yet, we still have a long ways to go, but if we don’t have support each other now, it may not be as bright as a future for us as it could be.

So boys, girls, men, and women support the WNBA if you have a mother, a sister, a niece, a girlfriend, a cousin or whomever, because the bigger picture is its for all people and affects all people.

I love when a little boy or girl comes up and has my jersey on, or wants an autograph, why? Because they’re growing up in a culture that views women as strong, smart, athletic, capable, and worthy of respect.

Last point: I get tired of hearing people say, “well you walk into a women’s basketball game and you see so many women.” WELL, I’d counter, you walk into a men’s game and you see mostly men. THIS is an important point, because at the end of the day, it can’t be an “us” verses “them” mentality. We all need each other. In GENERAL it is mostly men who watch, support, follow sports, and that’s why I go back to my point of even if you’re not an athlete, or not a women, or you don’t know an athlete, it’s still important to support it, because in the end, it affects everyone one of us, male or female, because of the bigger picture is represents in our society. UNITY is an amazing word and when its captured, produces amazing results. But ladies, how can we ask the guys to support it, when we don’t support it ourselves! WE need EVERYONE, but, ladies, lets start with ourselves!

I have nothing to add other than: what she said.