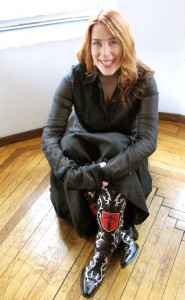 Q: Where were you born?

A: Sydney, Australia. In Paddington Women’s Hospital, which is now a block of flats.

Q: How do you pronounce your surname?

A: Wonderful. I’m very lucky because even if I wasn’t married to him I’d be a Scott Westerfeld fan. This way I get to read and comment on everything he writes first. He’s also a fabulous editor and reads and comments on all my work.

Q: Do you both write in the same room? Or do you have separate studies? Isn’t it annoying having someone else working so close by?

It’s not even slightly annoying writing in the same room as Scott. We get to ask each other for synonyms, how to spell things, and whether Agnetha is an okay name for a character? (Apparently not.) It makes writing even more fun.

A: (For those who don’t know, me and Scott spend half the year in Sydney, where I’m from, and half in NYC, where Scott has lived the majority of his life.)

Living in two places is most excellent. I have two sets of friends. Two sets of favourite restaurants. Two sets of everything really. When it’s six months at home and then six months in New York City I rarely get homesick and nor does Scott. Works out pefectly. Also lots of summer. I love me some summer.

Q: Why do you love Elvis so much?

A: Why doesn’t everyone? The story of how I came to love Elvis love is here.

Q: Why do you love sports so much?

Q: What kind of car do you drive?

A: I do not drive. I have never learned how. I dislike cars. I think they are the worst invention of all time and responsible for untold carnage. Not just to all the people killed in and by them but for making us so dependent on oil. I wish cars did not exist. Our world would be in much better shape. We need to switch to bicycles and horses. And airships. Transmat beams would also be most excellent.

A: All colours are good colours. Except vomit yellow.

Q: Have you ever played organized basketball?

A: Briefly in primary school. I have never excelled at team sports. I, um, don’t take direction well.

Q: What’s your favourite place in Sydney (apart from the cemetery in Newtown)?

There are so many! But right now—other than our home and my parents’ house—it’s the Botanical Gardens and Centennial Park.

Feel free to ask more questions below. I can’t promise a quick response but I definitely will answer.

This site uses Akismet to reduce spam. Learn how your comment data is processed.