I have a rule that I never respond to bad reviews. I have blogged on several occasions about why I think doing so is pointless. However, I can’t help noticing a certain tenor in many Paranormal/Fantasy YA reviews lately. Everything seems to be talked about in terms of Stephenie Meyer’s Twlight books.

On the one hand it’s inevitable given that they are the most popular books, not just in YA, but in the entire world. Meyer’s had a huge influence and, yes, there are many Twilight knockoffs out there. But on the other hand, people seem to forget that Meyer’s books are very new. Twlight was first published in October 2005. YA fantasy had already existed for decades before Meyer. There were even YA vampire books before Twilight. Thus the constant accusations of ripping off Stephenie Meyer and jumping on the “paranormal bandwagon”1 are a bit rich, particularly when aimed at say, L. J. Smith, whose vampires novels were first published in 1991. Pretty hard to rip off a book pub’d almost 20 years before yours.

The constant accusations have led me to develop a bingo card so all us writers of YA Fantasy/Paranormal can tick each item off as we are accused. I admit I got the idea because I was recently accused of jumping on the paranormal bandwagon and ripping Stephenie Meyer off with my debut novel, Magic or Madness. As you’ll see below I get bonus points because MorM was first published before Twlight.2

Sometimes I am overwhelmed with the urge to educate people about the timescales of publishing. Not to mention how influences, trends and fashions work. But not today. Today I am in a mocking mood.

So here is my (Sarah Rees Brennan, Diana Peterfreund and Carrie Ryan contributed) list of squares on the Paranormal/Fantasy YA Review Bingo Card.3 See if you’ve gotten a review that allows you to cross off each one. I suspect pretty much all of us who write YA fantasy will be winners.

I’m sure I’m missing some. Do please suggest more in the comments.

NOTE: Please don’t bash the Twilight books in the comment thread. Stephenie Meyer and her books have been an enormous boon to the field of YA. She’s created more readers than anyone since J. K. Rowling. The fact that the criticisms above keep happening is testament to that.

Update: Aja went and made the bingo card! Bless! 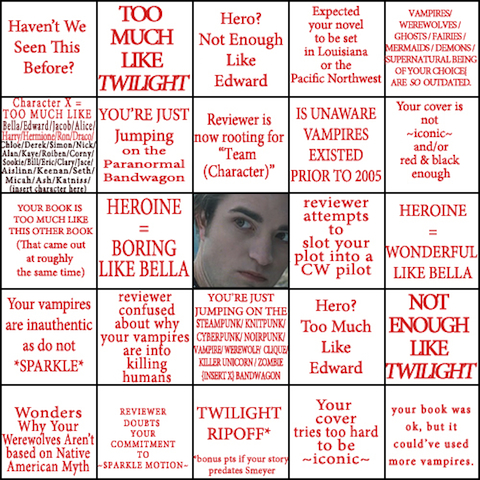 You can see it bigger here. Thank you, Aja!